indexoncensorship: Open letter to the King of Morocco in support of Ali Lmrabet

Activist shouts slogans in support of editor Ali Mrabet in front of parliament in Rabat, Morocco on July 24, 2015. Moroccan journalists and activists are calling on the government to end the harassment of Mrabet, who is on a hunger strike. (Paul Schemm/Associated Press)


RABAT, Morocco — Some 100 Moroccan journalists and activists demonstrated Friday in front of the parliament in solidarity with an editor on a monthlong hunger strike over his treatment by the government.
Ali Mrabet, editor of DemainOnline, has been on a hunger strike in front of Geneva’s Palais des Nations since June 24 over what he is calling government harassment preventing him from working.
Omar Brouksy, a journalist at the demonstration, said Mrabet was being targeted for his outspoken criticism of the state but also it was an attack on journalists in general despite a reformist constitution and public commitment to press freedoms.
“The problem with Morocco is the flagrant incoherence between the laws and the official discourse, on one hand, and the reality, which is very repressive,” he said.
Morocco, a popular tourist destination, is generally considered more stable and open than its North African neighbors, but it still ranks low on press freedom indexes.
Mrabet was banned by a judge from practicing journalism for a decade. During that time he published the French-language DemainOnline, which was critical of the state and often poked fun at it.
When the ban expired in April, he announced plans to bring back the print version of his weekly. Since then he said he has been repeatedly harassed and authorities refuse to issue him a certificate of residence so he cannot renew his identity card, passport or set up his newspaper.
Most of Morocco’s print and broadcast media now strictly follow official red lines — avoiding criticism of the king, the country’s policies in the Western Sahara or Islam.
Many independent-minded journalists have gone online instead, but in 2014, news website Lakome.com was shut down after its editor was briefly charged with abetting terrorism by writing about an al-Qaida video.
Publicado por Elcalam en 12:27 No hay comentarios:

To
Your Majesty Mohammed VI,
At a time when Morocco is advocating openness, democratisation and full respect for human rights as instruments for confronting the future, we receive the news of the hunger strike begun by the journalist Ali Lmrabet. For this reason, we wish to pass on to you our deep concern for the situation of this journalist, who has received dozens of international awards and who is deprived of his national identity documents coinciding with the end of a 10-year ban on exercising the profession of journalist in Morocco and also with his announcement that he wishes to return to professional activity.
Freedom of expression and criticism are fundamental elements for the consolidation of a democratic state that is active against regression and intolerance. Any attempt to restrict freedom of expression degrades the image of Morocco and the credibility of its commitment to the rule of law.
Precisely because, from here, we wish to lend our full support to any effort to transform Morocco developed at different levels of the political world and civil society in the country, we are writing to you to express our serious concern at the current situation of Ali Lmrabet, whose life is in danger.
For all these reasons, we would ask you to reflect on this to give instructions to the administration in your country, and its diplomatic staff in Switzerland in particular, to renew all Ali Lmrabet’s Moroccan citizenship documents.
Without a residence certificate, passport and other documents related to journalistic work, Ali Lmrabet would become the first Moroccan deprived of his civil and political rights.
We do not need to give you, Your Majesty, lessons in the fact that the deprivation of these rights is contrary to all liberties, including fundamental freedoms, freedom of expression and, in the case of Ali, the internationally recognised and acclaimed right to freely exercise the profession of journalist. The only thing we would ask you, Your Majesty, in your capacity as Head of State, is to strictly apply the provisions of the Moroccan Constitution, giving the right to all citizens to fully and freely exercise their profession, in this case as journalist and editor of publications in Morocco.
We look forward to your considered response.
Yours sincerely,

LETTER SIGNED BY THE FOLLOWING PERSONALITIES: 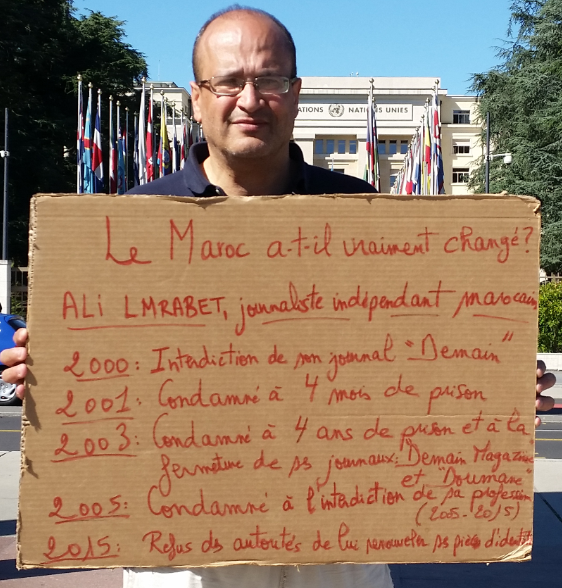